Accessible transport infrastructure is created by listening to the customer

Measured by the percentage of people aged 65 and over, Finland has the third oldest population of the world. We all suffer from disabilities or mobility impairments at some point of our lives. “We may be confined to a wheelchair or pushed in a pram or have to walk with crutches. Small children also belong to this group,” explains Riitta Tammi, Specialist, Citizen Relations, at the Finnish Transport Infrastructure Agency. 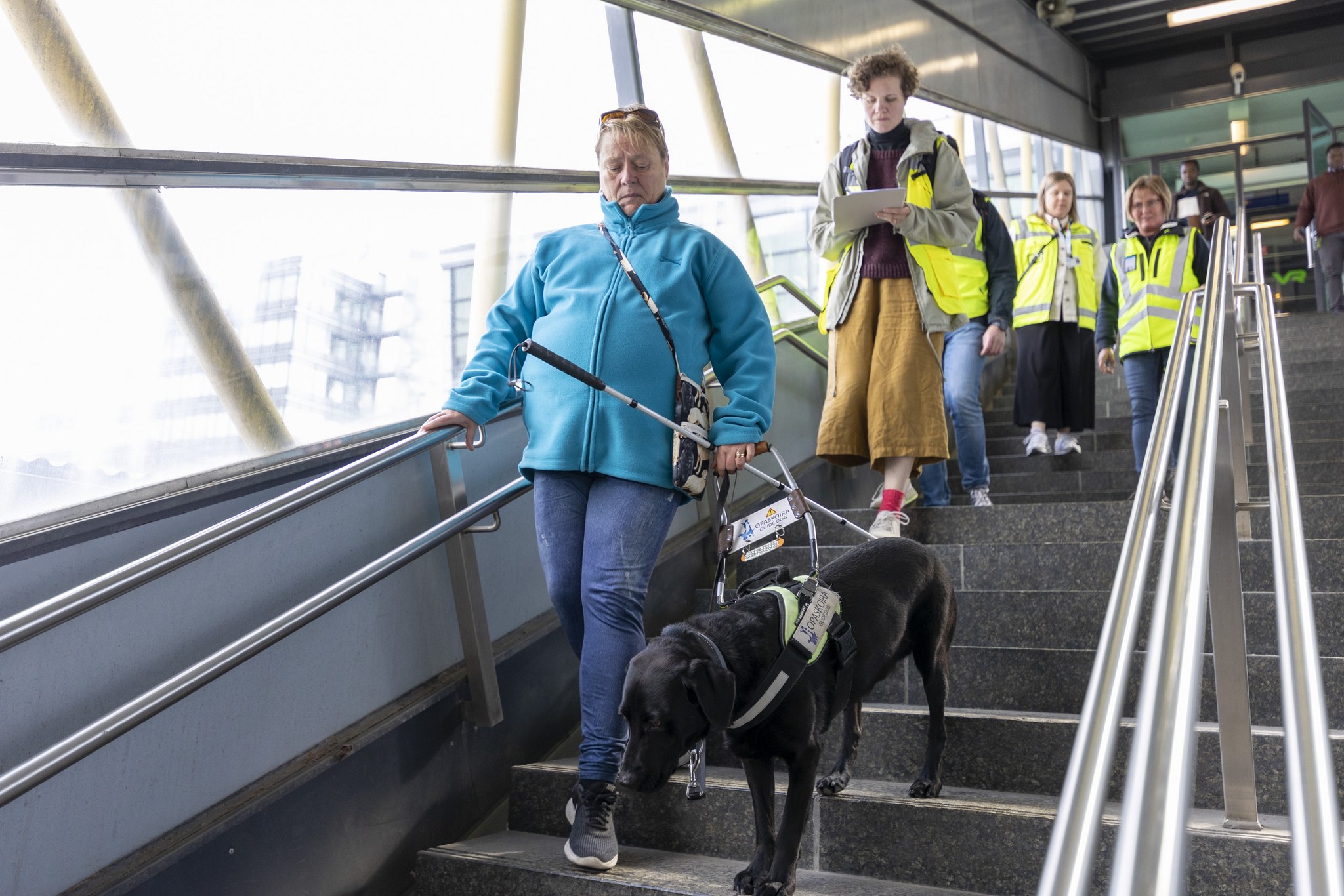 Image: In August, Taru Luukkala tested the temporary traffic arrangements at the Kupittaa railway station and in the station area.

It matters a great deal how temporary traffic arrangements are managed. “Independent mobility is an important part of our daily lives. Everybody will benefit when you can get from one place to another without problems and the infrastructure works,” Tammi notes.

It was proposed in a workshop for project managers of the Finnish Transport Infrastructure Agency’s construction projects that local residents should be invited to test temporary traffic arrangements. Information on arrangements used at other project sites was collected as background data.

Even though the Finnish Transport Infrastructure Agency has instructions on how to implement temporary traffic arrangements, the differences between construction sites must be taken into account. “With such a testing model, we are able to consider the needs of different groups,” Tammi explains.

“We were helped by the Finnish Association of People with Physical Disabilities and the Finnish Cyclists’ Federation in the development of the operating model. We met with representatives of these organisations to determine what concrete matters people would test and how we should recruit people for the tests,” says Tammi, describing the preparations for the testing.

We tested the operating model in real-life environments

The operating model has been used in six locations in different parts of Finland: in five locations with mobility impaired individuals and in one location with cyclists.

Mobility impaired persons have assessed such matters as the width of the path, ramp slope and the path surface materials. “We also examined the signposting and lighting and whether the areas under construction are considered safe,” says Tammi, listing the matters considered in the testing.

“In Kuopio, for example, the people taking part in the tests felt that some sections were too narrow for wheelchairs. At Kupittaa in Turku, the information boards on the temporary arrangements were considered inadequate and the city authorities had provided signposting for routes that have obstacles, such as thresholds. If the pedestrian path leading to the platform is inaccessible, the platform is also inaccessible,” Tammi notes.

Cyclists assessed the accessibility and signposting of diversions as well as the sense of safety in the vicinity of the construction sites. “Cyclists noted that the boundaries between the construction site on the one hand and the pedestrian and bicycle paths on the other are not fully clear. They also felt that maps and better signposting are needed to mark the diversions,” says Tammi, describing the feedback from cyclists.

Based on the feedback received by the Finnish Transport Infrastructure Agency, changes have been made to the temporary traffic arrangements. “For example, we now have more fences at the construction sites, maps are larger and signposting has been improved. We will also send memos on the testing to the city authorities or real estate companies if we get feedback from the interface between the Finnish Transport Infrastructure Agency and the other operator.”

The Finnish Transport Infrastructure Agency is planning to make testing by citizens a permanent part of projects carried out in urban and station areas because the tests have brought clear benefits for the projects.

“According to our project managers, the feedback sent by citizens generate added value and prompt operators to examine matters from new perspectives. This information helps us to improve the arrangements for future projects, which in turn generates a better customer experience,” says Tammi, summing up the benefits of the tests.