The core network and comprehensive network in Finland

The length of the national comprehensive highway and rail network is about 8,800 km, of which the core network accounts for about 2,460 km.

The comprehensive network in Finland includes 18 airports and 12 harbours.

In addition, the TEN-T network includes Horizontal projects: The Motorways of the Seas (MoS), the telematic applications SESAR, ITS, ERTMS, RIS, and VTMIS, and border crossing; a European standard main link to Russia goes through Vaalimaa (road) and Vainikkala (rail).

The Connecting Europe Facility or CEF is a funding instrument based on a regulation that defines the preconditions, methods, and procedures for granting EU funding for infrastructure projects for trans-European networks to support transport, energy, and telecommunications. The transport sector budget for the 2014-2020 financial period is 26.250 billion euros, of which 11.305 billion is earmarked for the cohesion countries. The support varies from 20-85% depending on the type of project that is involved.

In Finland the Ministry of Transport and Communications coordinates and gives information on TEN-T and CEF Transport matters together with the Finnish Transport Infrastructure Agency. Information briefings for stakeholders on applying for funding are held regularly, as are possibilities for presenting announcements and information to representatives of the European Commission on the progress of projects receiving funding.

Nordic transport officials work closely with CEF Transport in matters concerning policy and applications. Nordic cooperation promotes cross-border projects and the implementation of the goals of TEN-T and CEF. A representative of the Finnish Transport Infrastructure Agency takes part in the advisor group maintained by the Commision with respect to CEF Transport (read more here).

Of all EU countries Finland has clearly been the biggest recipient of support for maritime projects. Read more here.

In the previous funding period in 2007-2013 Finnish project partners were involved in 45 TEN-T projects. Further information on Finland's TEN-T projects is available here.

The Ministry of Transport and Communications (LVM) is responsible for matters concerning TEN-T and the Connecting Europe Facility (CEF) in Finland, and the ministry represents Finland in the EU. The Finnish Transport Infrastructure Agency coordinates the CEF Transport applications and ongoing projects of the Finnish government. LVM, together with the Finnish Transport Infrastructure Agency and the Finnish Transport and Communications Agency Traficom has reorganised the national TEN-T and CEF Transport team as of 1.1.2019. The TEN-T team is responsible for the national implementation and reporting on TEN-T and CEF Transport issues. The work of the team is supported through PSA (Program Support Action) funding of the CEF programme. The team has solicited competitive bids from three consultants to help in the work: Strafica, Ramboll, and Wega. The Ministry of the Environment certifies that project applications from Finland comply with environmental legislation (application form C). In addition to coordinating matters related to TEN-T and CEF Transport, the Nordic TEN-T officials have launched closer collaboration in 2018.

The European Commission proposed on 6.6.2018 that the Connecting Europe Facility (CEF) should be revamped as part of the EU's next long-term budget period from 2021 to 2027. EUR 30.6 billion would be earmarked for transport investments of the Connecting Europe Facility. In connection with the changes consideration has also been given to matters including: The northern expansion of the Finnish proposal for a North Sea - Baltic Sea core network corridor. The proposal is to extend the North Sea - Baltic Sea core network corridor via Finland to the core port of Luleå, Sweden, linking Finland's rail network with the core network corridor. Another proposal is to extend The Scandinavia - Mediterranean core network corridor from Southern Sweden to the Luleå core port from where it would continue to the Norwegian core port of Narvik. The proposed extensions anticipate the growing significance of Arctic policy. 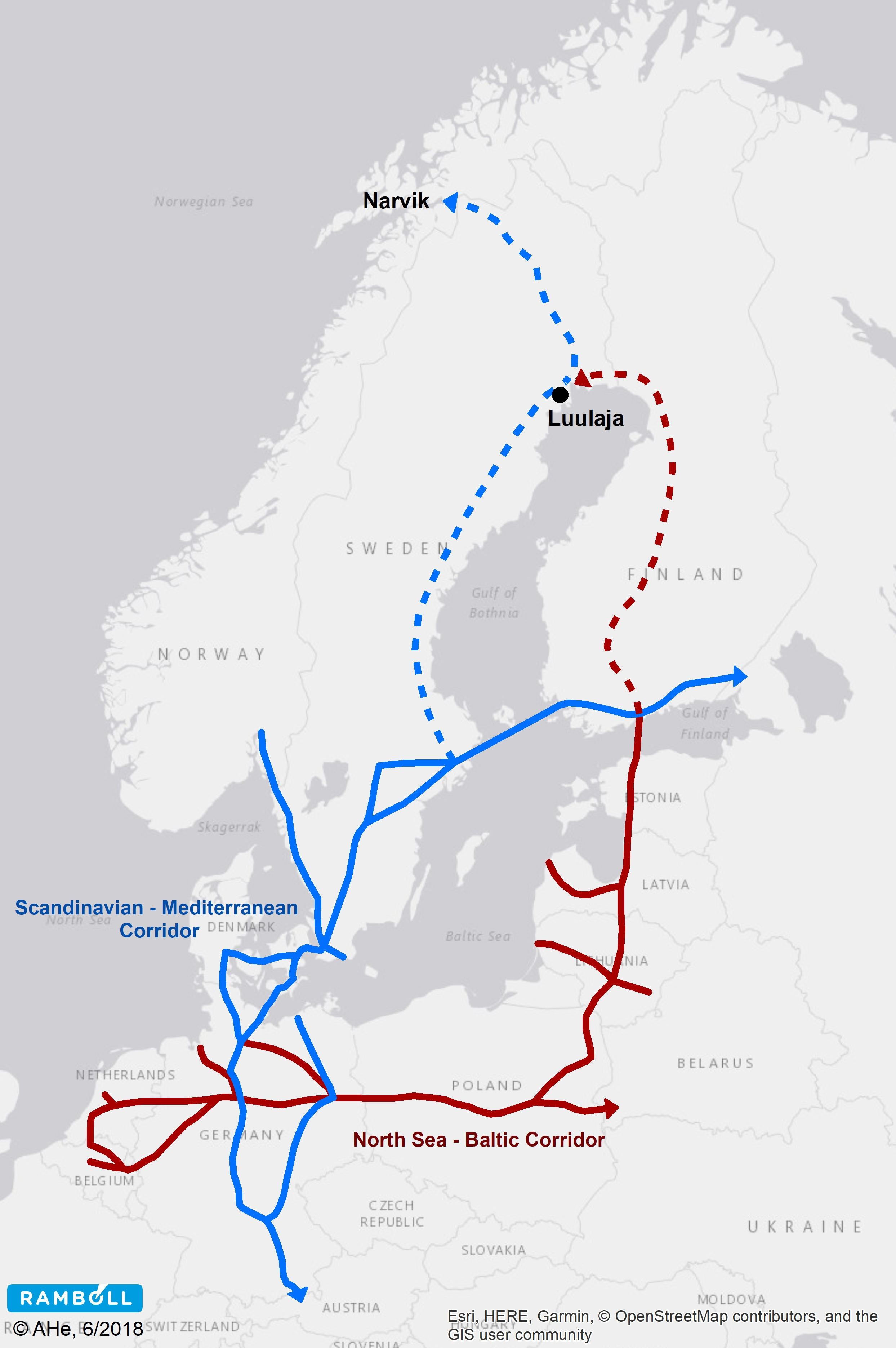 Picture of the proposed expansions of core corridors.

Couldn't find what you were looking for?

Were you unable to find the information you were looking for on these pages? Below you will find links to various TEN-T pages.

Information on the TEN-T network

Information on the application process

The contents of this website are the sole responsibility of Väylävirasto and do not necessarily reflect the opinion of the European Union.