This winter maintenance of walking and cycling routes has involved “a lot of ploughing, less anti-slip treatment”

What do ice cream sales and road maintenance have in common? Both are more affected by weather than anything else. This winter the temperature has remained below freezing for a long time, and there has been a lot of snow. The weather has directly affected the methods used in the maintenance of walking and cycling routes. 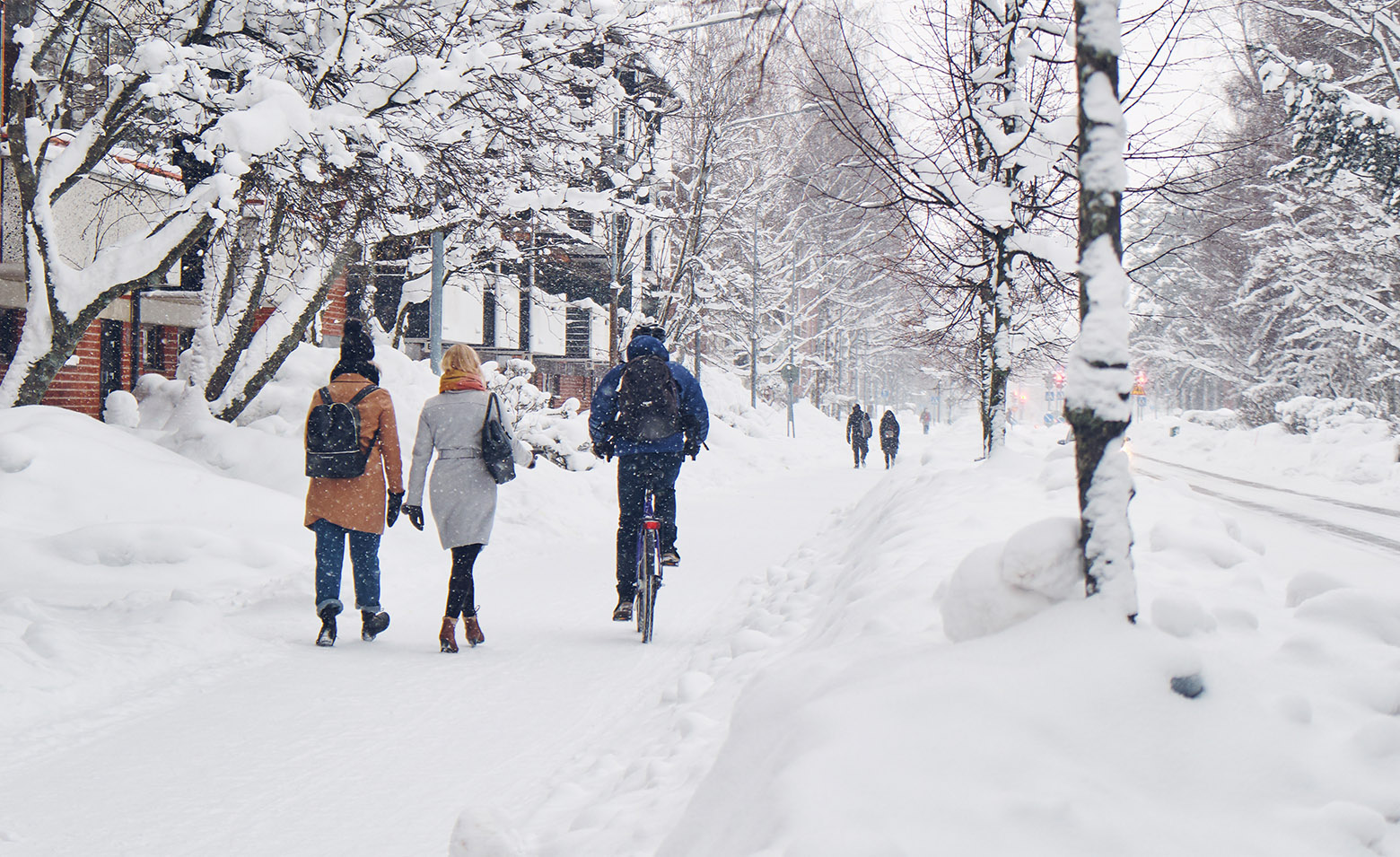 “The contractors have been performing a lot of ploughing and applying less anti-slip treatment,” says Jarkko Pirinen, Specialist, Road Maintenance at the Finnish Transport Infrastructure Agency.

From the perspective of road maintenance and the transport infrastructure, “traditional winter weather” like this is better than if the temperature was shifting above and below zero. Changeable weather makes the use of anti-slip treatments difficult. Furthermore, the constant melting and re-freezing of water damages the surfaces.

“Of course, heavy snowfalls also bring their own challenges, with, for example, growing snowbanks weakening visibility. There may also be problems with accessibility on walking and cycling routes if traffic light buttons are difficult to reach or there is a snowbank in front of a pedestrian crossing,” Pirinen says.

Lately, there has been so much snowfall that snowploughs in particular have been extremely busy. Especially with a view to cycling, the road surface must be even, and that cannot be properly achieved without ploughing. In all maintenance, ploughing included, correct timing is the key. Careful and timely snow removal prevents snow from packing into a thick layer and facilitates work – the longer snow remains unploughed, the harder it is to remove.

During the past year, most of the feedback on winter maintenance of walking and cycling routes has concerned the condition and ploughing of road surfaces. Blizzards bring their own challenges to ploughing, as there is not enough equipment for all roads at the same time.  The busiest roads are ploughed first, so it may take hours before snowploughs reach the low-traffic roads. If you have feedback on winter maintenance, for example, you can provide it at https://palatevayla.fi/aspa?lang=en

Maintenance is part of proactive healthcare

“In Finland, people experience some 80,000 accidental falls requiring first aid, of which 2/3 involve pedestrians. Among the causes of slipping, slippery surface is the most common, but by no means the only one. According to the Finnish Road Safety Council's survey, also such reasons as hurry or the wrong choice of shoes contribute to slipping,” says Mika Terhelä, Specialist, Road Maintenance Procurement at the Finnish Transport Infrastructure Agency.

“Therefore, their maintenance requires cooperation. For example, in the Oulu region, municipalities, the state and the City of Oulu cooperate to promote cycling. Similar cooperation is also under way in other large urban areas,” Terhelä says.

Cooperation is often based on the principle that the quality of maintenance on specific routes remains the same even if the party responsible changes.

“If there is no cooperation, the quality may vary greatly, as different organisations tend to have their own contractors and quality requirements.”

In other words, increased cooperation is one way of improving the maintenance of walking and cycling routes. Are there any other improvements in sight? According to Pirinen and Terhelä, salt sweeping is a relatively new working method.

“Salt sweeping is suitable for relatively low-snow environments, where the aim is to keep the road completely bare. It can also be used for removing black ice. Of course, sweeping is also done without using salt. On main roads, sweeping is not a typical snow clearing method used, but it could be quite efficient in urban environments,” the two colleagues say.

Much room for improvement

In addition to new methods, the existing ones should also be used more efficiently. In the 2019 road user satisfaction survey, only about one out of four respondents were satisfied or very satisfied with the maintenance of cycling routes in winter.

“We still have a long way to go before reaching our targets. Improved maintenance would also provide potential for increasing the amount of cycling and the achievement of climate targets. According to the cycling survey conducted by the Finnish Road Safety Council, 64% of Finns could cycle more in winter if winter maintenance of cycling routes improved,” Terhelä says.

The guidelines on how to make things better are also clear.

It is easy to make quality work on paper – the requirements for maintenance are strict as they are. However, when putting things into practice, a variety of problems may arise. The importance of self-inspection of completed work becomes emphasised. The coverage of quality assurance rounds must be improved, and inspections must also be performed by bicycle to discover potential problems.

More information on the maintenance of walking and cycling routes can be found, for example, in the guidelines published in 2020.