The E18 Hamina–Vaalimaa project comprised 32 kilometres of new motorway and the related road arrangements. The road section from Hamina to Vaalimaa was completely opened to traffic in March 2018 and it was the final section of the E18 motorway, which crosses the country from Turku to the eastern border. The service provider of this PPP project was Tieyhtiö Vaalimaa Oy, and the procuring authority was Finnish Transport Infrastructure Agency. The main contractor was YIT Rakennus Oy. 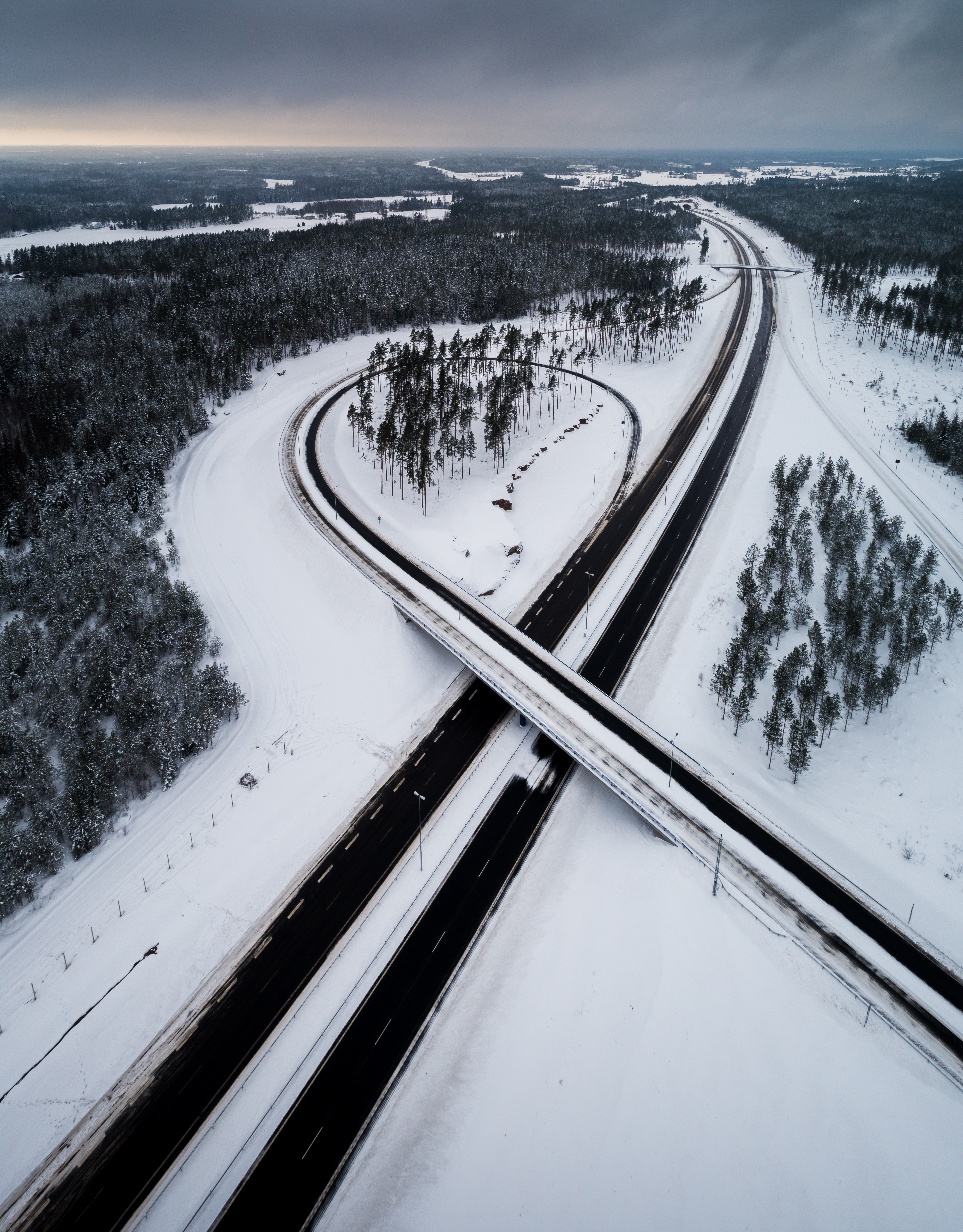 Road 170, e.g. the old main road 7, is a narrow road with closely spaced interchanges. Before the construction of the highway, the number of vehicles between Hamina and Vaalimaa amounted to 6,000 per day, 3,500 of which crossed the state border. The share of heavy-duty vehicles was 30 %. During peak periods, the large traffic volumes caused up to 30 kilometres long queues of lorries at the border and the road's capacity was not sufficient to meet the transport needs. Additionally, traffic volumes have been expected to more than double during this decade.

A high number of pedestrians and cyclists also use the road between Virojoki and Vaalimaa. On this stretch of road there were an average of six personal injury accidents and at least one road fatality each year.

The new motorway, which was finalized in March 2018, was built just north of road 170, e.g. the old main road 7. The main road now runs parallel to the the motorway and it was improved during the year 2018, for instance by building roads for pedestrians and cyclists.

Fast and convenient travel the area is now more secure and comfortable.Travelling is eight minutes quicker than previously, and planning journeys became more predictable. By 2040 the number of traffic accidents resulting in injury will be reduced by 60 %.

Noise, pollution and safety issues that have been burdening people living along the road have disappeared. Excellent noise barriers reduces significantly noise pollution. Groundwater in the area has been protected. Careful study of important environmental and cultural attractions had been made and was taken into consideration during construction.

The project brought a new era to southeastern Finland, with the new highway creating a great opportunity for development in the region. Southeastern Finland’s trade, tourism and commercial life will become busier due to significantly improved transport connections. The new road will attract investment and increase passenger numbers.

The route was realised by means of the life cycle model, where the service provider was Tieyhtiö Vaalimaa Oy, which was responsible for the construction, financing, mantenance and possible general renovations during the contractual period set to continue until 2034.

Motorway was completed ahead of schedule and at a lower cost

The preparation of the project started in 2014 according to the agreed planning. In June 2015 Finnish Transport Infrastructure Agency and Tieyhtiö Vaalimaa Oy signed a 19-year service agreement to build the Hamina–Vaalimaa motorway on a public-private partnership basis, and after this YIT Rakennus Oy begun the road construction. The construction of the highway took place mostly quite far from residential areas, which narrowed down disturbing the ongoing traffic.

The waiting area for heavy vehicles at Vaalimaa was opened in January 2017, and the first section of the E18 Hamina–Vaalimaa motorway, from Lelu to Kattilainen, was opened to traffic on 10 February 2017. The length of this section is roughly five kilometres, including two grade-separated intersections and four bridges: the Lelu and Kattilainen overpasses and Hirvelänkallio and Lelu wildlife overpasses.

The shell on the Lelu overpass columns display the Hamina town plan and the entire bridge is illuminated by LED lights from within. Wildlife overpasses help to maintain the ecological corridors animals use to move from one area to another.

On Valentine's day 2018 the third part of the project from Kattilainen to Virojoki was opened. The 20 km long section contains three intersections and 23 bridges. The section contains Kärmekorvi wildlife overpass and about 120 meter long Jänismäki bridge that is the longest bringe on E18 Hamina–Vaalimaa motorway.

The final part of the E18 Hamina–Vaalimaa motorway, a section of 8,5 km from Virojoki to Vaalimaa was opened for traffic on the 1st of March 2018. 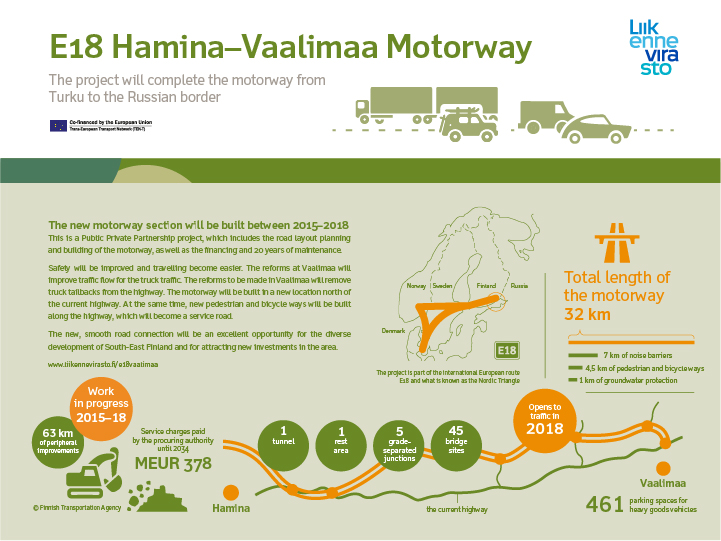 Public Private Partnership design, construction, maintenance and funding have a total cost of €378 million, of which investment costs are €265 million (Construction cost index 2005, 150). The project has received support from the European Union’s Trans-European Transport Networks (TEN-T). The investment benefit to cost ratio is 1:1.