The West Metro Connections project aims to make the Länsiväylä motorway better for residents and motorists in the area. Effective noise mitigation and a more comprehensive network of pedestrian and bicycle routes will improve the quality of life in the area. Good public transportation connections, smooth traffic flow and decreased traffic congestion benefit everyone. 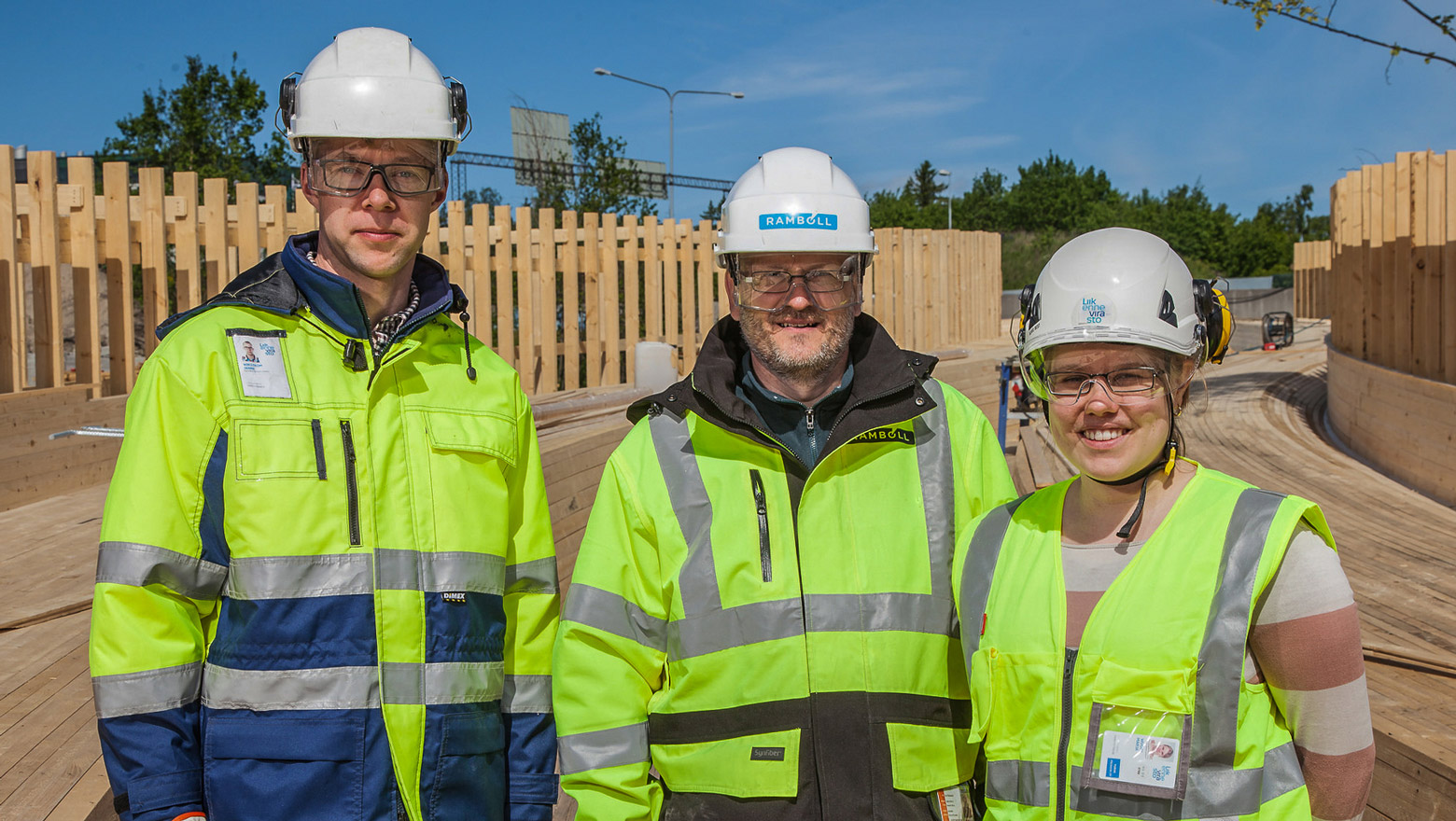 Improvements to the Länsiväylä motorway between Espoonlahti and Matinkylä will be made in 2014–2016. The goal is to ensure a smooth flow of the West Metro feeder traffic, improve the flow of public transportation and alleviate traffic congestion along one of the capital area’s busiest traffic corridors.

Weekdays bring an average of 30,000–70,000 vehicles to Länsiväylä, and the numbers are expected to continue growing in the future.

The project also includes an enhanced network of pedestrian and bicycle routes, better noise control, and deployment of a new traffic control system with signage.

The West Metro Connections project will be completed in 2016.

The continuous bus lanes from Espoonlahti to Helsinki are mostly completed. An exception is the Espoonlahti ramp area heading to Helsinki. There is repair work under way after a landslide occurred in the area in August 2014; the public transportation lane in the repair area is not yet in use. The public transportation lane heading to Hanko is estimated to be mostly completed in autumn 2015.

Additionally, a public transportation ramp will be built from Länsiväylä to Markkinakatu. This will give buses direct access to the Matinkylä metro station when the West Metro starts operating in autumn 2016.

Deployment of a traffic control system will also improve traffic flow. Three real-time information signs will be built along Länsiväylä, as well as signage about parking availability at the metro station park-and-ride facilities.

Installation of the equipment will begin in summer 2016, but is not expected to cause any major traffic disruptions because the signage cabling and foundations have already been done.

A safe walk or bicycle ride to your destination

Enhancing the functionality and safety of the pedestrian and bicycle network is a key part of the project.
New routes for pedestrian and bicycle traffic will be constructed on both sides of Länsiväylä between Piispansilta and Matinsolmu. These foot and bike paths will improve access to the Matinkylä metro station.

The south end of Ring Road II will have an overpass bridge for foot and bicycle traffic and will improve safety for kids going to the Mattliden School. At approximately 137 meters long and featuring an S-curve design, the overpass bridge will be a prominent landmark.

Road and street arrangements in Gräsanlaakso will significantly improve the traffic flow between Länsiväylä and Ring Road II. The work is mainly at the southern end of Ring Road II.

The goal is to achieve a smoother traffic flow in the area by converting the Gräsanlaakso road and Matinsolmu junction’s southern ramps – previously controlled by traffic lights and currently replaced with a temporary roundabout – into a three-arm roundabout.

The estimated completion of the finishing work in the area is spring 2016. The flow and safety of the area’s network of pedestrian and bicycle routes also will be developed.

The ramp bridge from Länsiväylä towards Ring Road II in the Matinkylä direction in the Gräsanlaakso area will be the next work to be completed.

The traffic noise in the residential areas will be mitigated by building a 2,300-meter-long noise barrier and lower noise bunds that are approximately one kilometer in length. This will reduce the number of people exposed to noise by about 200 from the current 500, and will make the residential areas more enjoyable.

Noise mitigation will also reduce the noise that affects local recreational areas, such as Suomenoja valley.

The noise barriers and bunds are mostly complete, the exception being at the Espoonlahti ramp and Markkinakatu street.

The West Metro Connections project is a joint venture of the Finnish Transport Agency and the City of Espoo.

Its estimated cost is EUR 19.9 million, of which the government’s share is EUR 13.1 million and the City of Espoo’s is EUR 6.8 million.

In conjunction with the project, an additional EUR 1.3 million will be spent on city streets and on the pedestrian and bicycle network.

The project was launched in summer 2014 and will be completed in 2016. 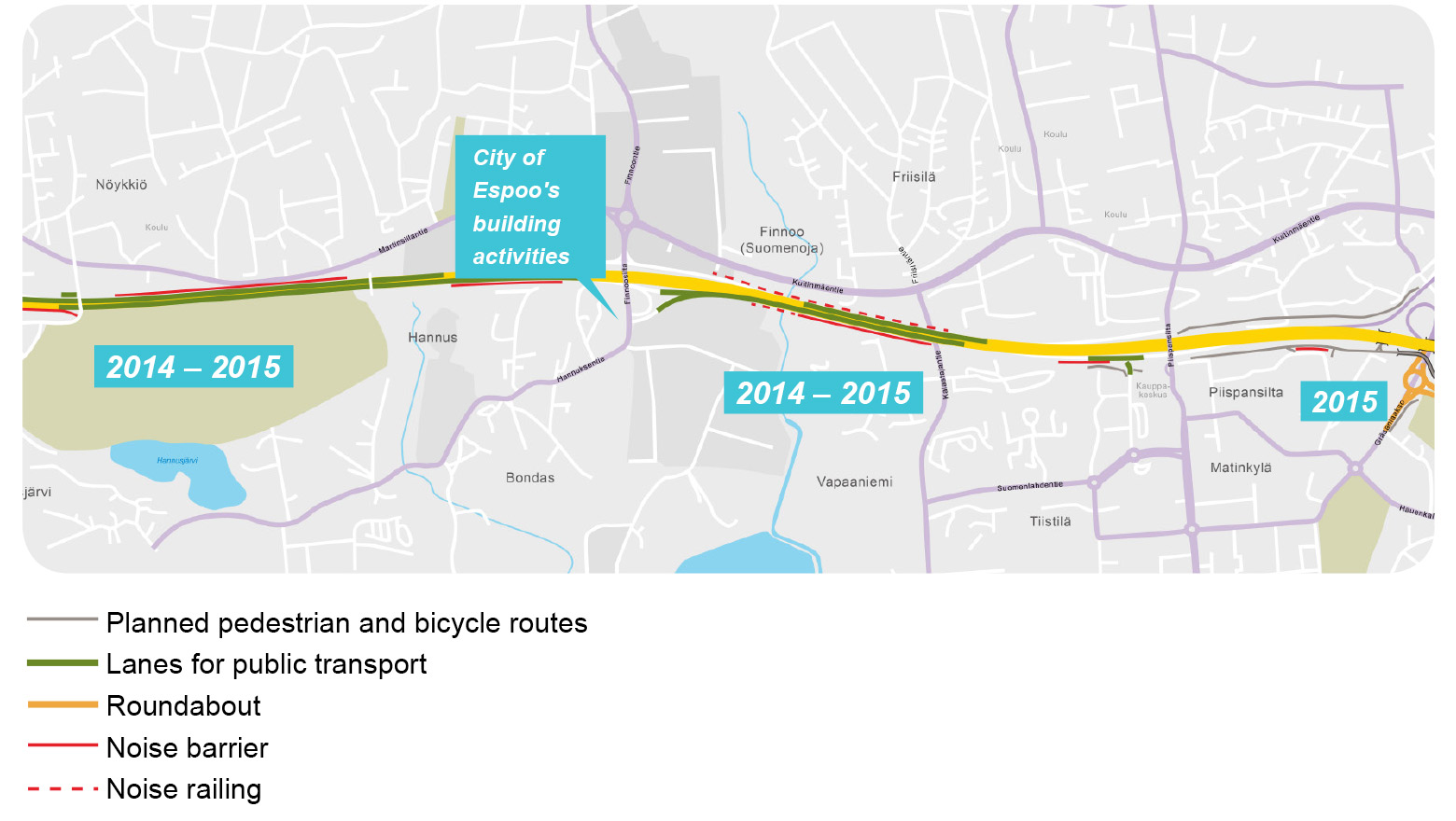