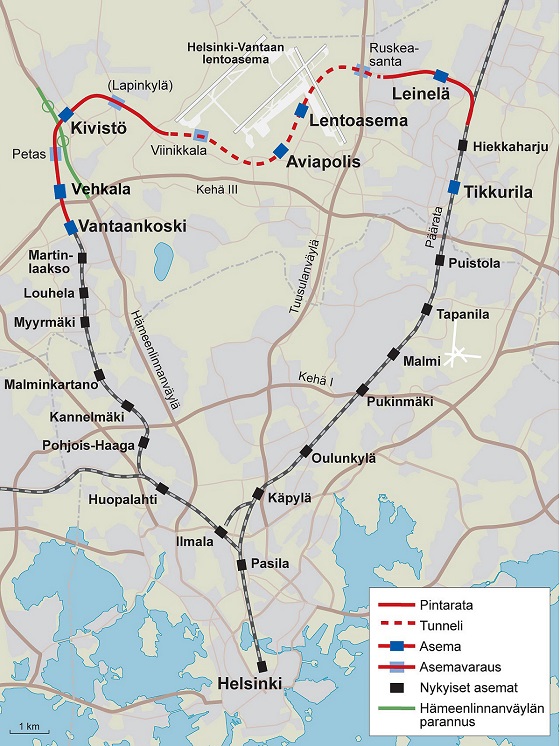 The Ring Rail Line is an essential part of the urban line network that improves public transport in the entire Helsinki region. The line connects residential and job areas. It also provides a rail link to Helsinki-Vantaa Airport.

The 18-kilometre line brings rail services to new areas in Vantaa, and feeder traffic allows people living farther away to take advantage of services as well. The Ring Rail Line will reduce the need for bus and car traffic along with associated environmental impacts and thus promote the EU's climate policy objectives.

Rail link from the centre of Helsinki to the airport

New SM5 low-floor trains designed for commuter services operate on the Ring Rail Line. These run at 10-minute intervals in both directions during peak periods. Rail capacity can be utilized more efficiently since trains are able to run in a loop. The journey time from the centre of Helsinki to the airport is about half an hour. The maximum line speed is 120 km/h.

Passengers coming on long-distance trains from the north can change trains in Tikkurila. The trip from Tikkurila to the airport will take about eight minutes.

The Ring Rail Line is an essential part of the urban line network that improves public transport in the entire Helsinki region.

Five new stations to begin with

The Ring Rail Line is a two-track urban line reserved exclusively for passenger traffic. It has surface stations at Vehkala, Kivistö and Leinelä as well as the Aviapolis and Airport tunnel stations. Plans allow for additional stations under ground at Ruskeasanta and Viinikkala and on the surface at  Petas. The busiest stations are Kivistö and Airport.

The Ring Rail Line goes under the airport in an 8-kilometre tunnel with two tubes. Coming from the west the tunnel begins on the northeast side of the Katriinantie-Tikkurilantie intersection and resurfaces in Ilola to the east of Laaksotie and south of Koivukylänväylä.

Connecting corridors are excavated at intervals of about 200 metres between the two tubes. In an emergency these can be used to exit to the other tube. Special emphasis has been placed on operational safety in planning and execution.

Improvement of Highway 3 between Ring III and Keimola

Road arrangements in the Kivistö area has been planned as part of the improvement of Highway 3 (the Hämeenlinna motorway) between Ring III and Keimola. The road plan includes a new Keimolanportti interchange, among other things. The old Hämeenlinna road (Vanha Hämeenlinnantie) was rerouted and  designed and landscaped to give it a more urban look and reduce speeds. High-standard bus stops has been constructed on the motorway and noise barriers were installed around it.

The total cost estimate for the Ring Rail Line project is 773,8 million euros. Financing will be divided between the Finnish state, the City of Vantaa and Finavia. The Ring Rail Line receives partial funding from the European Union´s TEN-T programme.

The cost estimate also includes improvements to Highway 3 between Ring III and Keimola and the first stage of the Tikkurila travel centre.

Construction of the Ring Rail Line began in spring 2009 and the line went into operation in June 2015.